The building envelope is the walls and roof you see from outside the house. The building envelope has many attributes both aesthetic, and functional. The aesthetics are purely subjective; however the functional properties can be objectively measured. Paramount among these functional properties for an energy efficient house are its insulation, measured in R values and its air tightness, which is a measurement that has not been commonly measured in home construction in the United States. The air tightness is measured after the house is built by closing all the windows and doors, then replacing the front door with a “blower door.” The house is pressurized and the amount of air that escapes is measured.

R values measure the resistance to the flow of heat across a barrier. I find it easier to think of R values as thermal dams. Higher R values imply that less heat is working its way through your dam…which is the wall of your house. Lower air infiltration is akin to reducing the water leakage between the stones that make up the wall of the dam. So if you have a great product to hold back the water of your dam (R value) but it leaks at the joints (air infiltration) you still have lost a lot of water (heat). The R value is primarily determined by the type of insulation used and its thickness, while the air infiltration is largely determined by construction methods. The concept of minimizing heat loss by controlling both the R value and air infiltration constitutes the fundamental principles of the PassivHaus movement. The PassiveHaus movement started in 1991, founded by Dr Wolfgang Feist of Austria, who has developed sophisticated software based on these principles, to reduce home energy needs to 5% of a typical house. (Note to self insert, drawn picture of heat dam, passive house energy needs graph) The exterior walls and roof of our house are made of structural insulated panels (SIP panels) which are made of two layers of OSB (orientated strand board which is manufactured from wood flakes) that are 7/16 inch thick and separated by 11 ½ inches of EPS (expanded polystyrene or Styrofoam). They have an R rating of 45 and the roof has an additional layer of 4 inch EPS to make it R 60. They were manufactured from our architectural plans at the Premier panel factory and arrived with all the window and door openings. 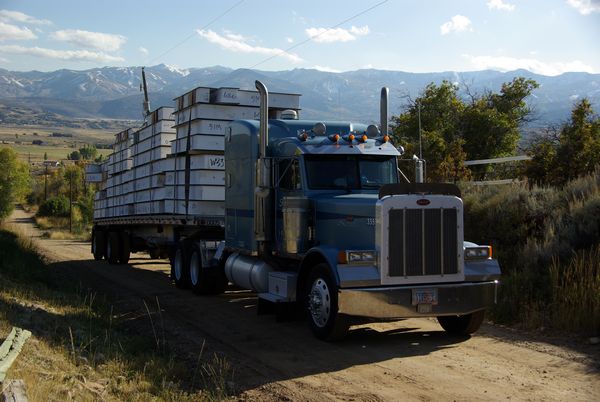 Prior to deciding on SIP panels, we looked at a gamut of options, including conventional construction using 2X6’s with fiberglass insulation, insulated concrete forms (ICF’s), straw bales, dry stacked masonry blocks, double wall designs, insulating concrete, and various other “blocks” made from mixes of concrete and recycled materials. I was overwhelmed by the options and uneducated to their use and performance. I owe my brother Dave a big debt of gratitude for steering me to the Oak Ridge National Laboratory website, www.ornl.gov. It is run by the Department of Energy, and one of its duties is to test house construction technologies. They have built identical houses from various materials and techniques and then intensively studied their performance. It was here that I was able to get good trustworthy information on the various options I was considering. 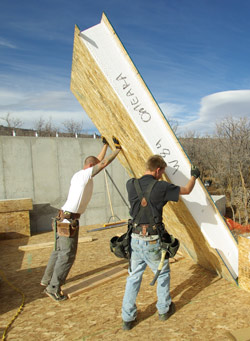 There I learned that using typical construction as represented by 2x6 stud wall framing which is usually thought as R19, only really delivers R13… after accounting for the typical air infiltration around the fiberglass insulation and the thermal breaks caused by the wood itself.

(Note to self insert infrared picture of conventional house and SIP panel house, graphs of R values of conventional framing vs. SIP panels of varying thickness)
Houses account for 21% of USA’s energy expenditure, and almost ½ of that if for heating and air conditioning. A typical Park City home spends about $300/month for heating. Depending on the reference you use, it is believed that for every dollar you invest in reducing your energy use you save 2-3 times what it would cost to produce. It became obvious that a tight, well insulated envelope was critical. At first we had the house bid using mostly 6 inch thick SIP panels which are commonly used. These insulate considerably better than conventional construction (R22 vs. R13). Then we had the bid redone to see what the thickest panel…12 ½ inches thick would cost. To be honest I thought it would be so much more as to be prohibitive, turned out it was only about 10% more! So, going with the thick panels, which we dubbed “Fat Boys” after the ice cream sandwich, were a “no brainer”.
(Note to self, insert pie chart from Wikipedia on US energy consumption, breakdown of home energy use.)
SIP panels also lend themselves to very airtight construction. The ORNL tested a 4 inch SIP panel vs. 2X6 wall construction that showed a marked difference, 9 vs. 126 cfm. Since SIP panels are precut at the factory, it drastically reduces onsite waste, so much so that we did not require a dumpster for construction waste!