This seemed like a very appropriate title for this chapter given the dimensions of our cement wall, total length close to 100 feet long, 18 ½ feet high, and 28 inches thick... now that’s a WALL. Why in the world did we build it that way? Thermal Mass.

Thermal mass acts to moderate the temperature swings inside a house by absorbing the excess heat produced from the windows during the day and then releasing it back into the house at night as it cools. Books like The Solar House by Daniel Chiras and
The Passive Solar House by James Kachadorian, which are considered the “Bibles” of passive solar home construction, recommend certain ratios of south facing windows (glazing) to thermal mass. These were not laboratory derived but rather from good old fashioned trial and error. However, from work on many houses, these authors had developed similar guidelines that seemed to work. The Passive Solar House even comes with software to use, which uses climate data, days and strength of sunshine, window surface area and orientation, window U and SHGC values, R factors of your insulation, and thermal mass estimates, area and volume, to help design your house. They were the pioneers of even more sophisticated software programs that exist today.

My wife and I wanted to maximize the passive solar performance of our house. Using the information we had read from these books, we designed the house to have a lot of south facing windows, which according to the software required a lot of thermal mass. Since there isn’t much thermal mass in SIP panels, or for that matter typical frame construction, the software recommended a concrete wall 24 inches thick! Hence the “WALL” came into existence

We were about ready to make then cement forms for a 24 inch thick cement wall, when we met a bright man named Troy Harvey of Heliocentrics. He introduced us to 2 new concepts that made the wall perform better, cheaper, and more environmentally friendly. His first idea was to use a 50% fly ash mixture, which I discuss in the Footer/Foundation chapter in greater detail (click here), and the other was the use of Phase Change Material, PCM.

Phase change refers to having a substance go from a solid to liquid, or liquid to gas…or back. If you plot the heat you add to a substance, you’ll see a straight line, you see a straight line. Meaning that if you add X heat the temperature will go up Y degrees…every time. When the substance melts (phase change) from a solid to liquid something strange happens. You add the heat and instead of the temperature rising, the substance just melts. This is commonly called heat capacity. It can be determined by measuring the heat energy required to raise the temperature of a certain volume or weight of a substance. Concrete is 30 BTU/cubic foot X F*, water is 62.5 BTU/cubic foot X F*and paraffin wax is 2722 BTU/Cubic foot X F*. 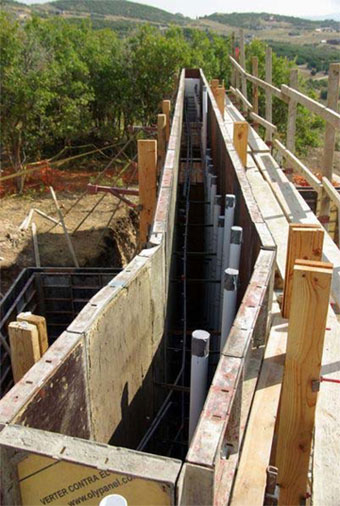 Troy had us add 1/1/2 inch PVC pipes inside the “WALL’s” concrete forms, spaced every 16 inches, nearer the interior surface, and filled with paraffin wax designed to melt, or phase change at our desired room temperature, that amounted to three 55 gallon drums of wax. The wax filled tubes allowed us to “skinny” down the wall to its present 16 inches. We could have gone even thinner, however the thickness of the wall also allowed us to eliminate using metal beams in our shear walls. Eliminating metal beams saved us money in construction costs, and reduced thermal bridging, or heat loss.

Recently in a Canadian building that was built for high efficiency, the scientists intensely monitored the temperature swings inside the building, which otherwise resembled typical residential construction, in other words it didn’t have much thermal mass. They first added a 4 inch thick concrete floor and saw significant damping of the daily temperature swings. Then they tried using drywall with a 30% microencapsulated PCM paraffin content added. It worked even better than 4 inches of concrete. The US ORNL lab has done much the same only using standardized laboratory houses, and found out that thermal mass could save about 25% of the energy required to heat/cool a house. They found similar results with PCM doped drywall and predicted a payback in just 3-5 years.

The net effect of using both the thermal mass of the concrete and the tubes of PCM, is that the temperature inside the house becomes “locked” within the “comfort zone”, between 68-72 degrees, without any additional energy source. This makes house both more comfortable to live in and yet more energy efficient as well.

Finally, we buried the north side of the “Wall” underground, which Australian studies have shown to further reduce temperature swings inside a house. We also created insulating thermal breaks in the concrete forms of 4 inch thick EPS, where the “Wall” extended beyond the thermal envelope of the building. We also used plastic rebar at these thermal breaks instead of metal rebar to further reduce heat loss. 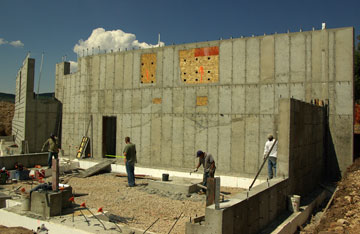